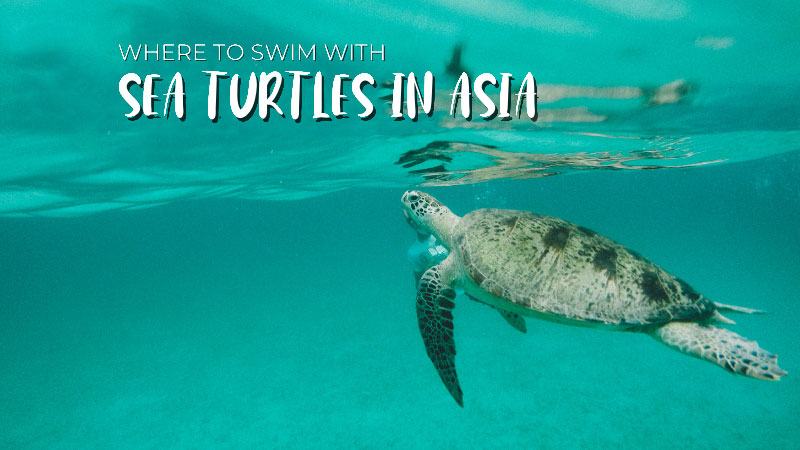 Where to Swim with Sea Turtles in Asia

Sea turtles have been around for over 150 million years and can be found all over the globe! If you’re yet to experience the magical feeling of floating alongside one in the wild then you’ve got an incredible trip to look forward to in the future. It can be difficult to find ethical experiences involving wildlife, so check out our rundown below of where we swim with sea turtles in Asia and how you can do so responsibly.

Sea turtles are at risk of a number of different threats, from habitat destruction & coastal development to plastic pollution and threats from abandoned fishing gear. Even things like indirect fishing (known as bycatch, where turtles get trapped by commercial fishing nets that are targeting other species), mean that the sad reality is that of the 7 species that exist in our oceans, 6 are now considered threatened or endangered. Green Sea turtles are listed as endangered, while Hawksbill turtles and Kemp’s Ridleys are critically endangered. Leatherbacks, Loggerheads and Olive Ridley’s are vulnerable and flatbacks are listed as endangered in some places only, such as Australia.

Sustainable tourism and raising awareness during your travels can contribute to sea turtle conservation. Keep reading for the ways in which you can have an ethical experience when you swim with sea turtles in the wild!

HOW SHOULD I SWIM WITH SEA TURTLES?

Initially, approach a turtle by first testing the waters (pun intended). Don’t jump into the water as a loud splash will startle the turtle, and avoid splashing a lot when you swim anywhere nearby. You should allow the turtle to get used to your presence and decide that you don’t pose a threat. If a turtle is on the move, it’ll allow you to cruise alongside provided you are not chasing it and are keeping a safe distance. Keep to the rules below to respect the turtle!

AWESOME, SO WHERE CAN I SWIM WITH SEA TURTLES IN ASIA?

The three Gili Islands are the absolute definition of paradise. Gili Air, Gili Meno and Gili Trawangan are all popular destinations in Indonesia, but Gili Trawangan is by far the most highly visited of the three. This unique island is where most backpackers will head to experience the vibrant island culture, awesome wildlife and great nightlife. The best part of visiting this island is that you can actually snorkel with turtles right off the coast! It’s an epic spot to explore, and the water is so blue you’ll never want to leave. If you’re not keen on snorkeling from shore there’s also the option to explore via boat and head further out where you’ll find many turtles, and even underwater statues! 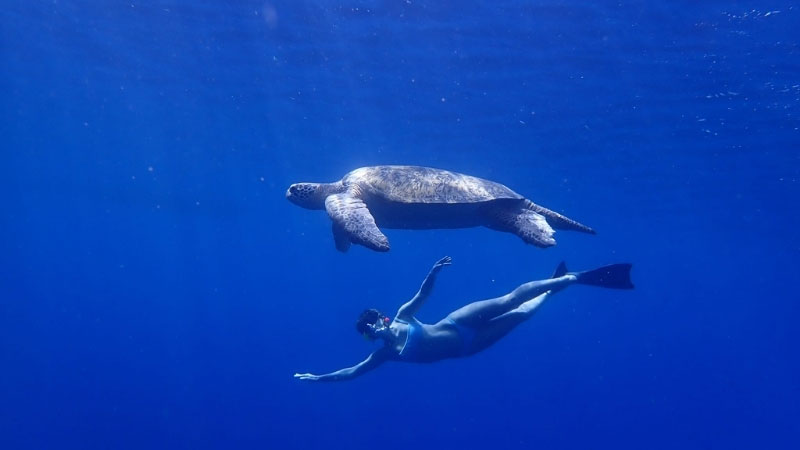 One Life legend Brooke snorkelling with a turtle in Gili T, Indonesia

3. HIKKADUWA, SRI LANKA.
Remember you don’t always have to be in the water to experience our incredible ocean! In Sri Lanka we visit an awesome turtle sanctuary/hatchery that rehabilitates some of these beautiful creatures and helps the species by providing a safe nesting site and promoting education about their plight. Instead of swimming with sea turtles, you get to experience them and find out how awesome they are, but from a truly safe distance! You can visit the turtles they look after and learn all about conservation so you can help educate others, before it’s too late. Want to learn more about the other kind of snorkelling you can do in Sri Lanka? Check out 3 of the top snorkelling sites in Sri Lanka here. 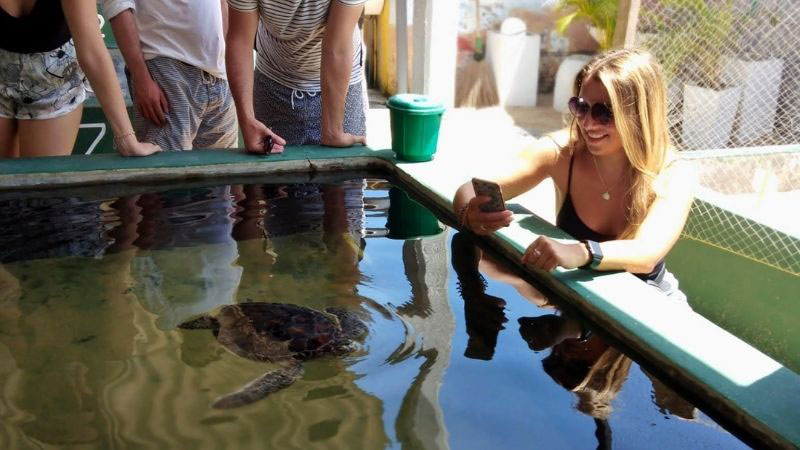 If you’re hoping to swim with sea turtles on your next trip to Asia, don’t hesitate to join us. We only work with local, ethical tour operators and ensure that all wildlife we come across on our trips are protected. Snorkel with us in the Philippines, Indonesia or adventure through Sri Lanka with us and visit the Turtle Sanctuary.

Anyone else dreaming of being on a tropical island